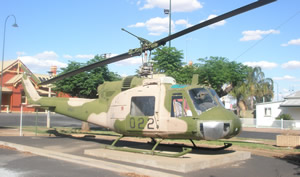 Iroquois 1022 was donated to the town of Nyngan by the Federal Government to commemorate the evacuation of residents during the tragic 1990 Flood. Helicopters were used to airlift stricken residents out of the town and few would dispute the Iroquois' appropriateness as a symbol of courage.
Delivered from the United States in 1962, 1022 played a vital role in the Vietnam War transporting Australian troops and equipment.

In May 2011 Iroquois 1022 was transported by volunteers to Caloundra in Queensland where the helicopter was fully restored and placed on display at the Caloundra RSL. A restored replacement Iroquois A2-022 was delivered to Nyngan and is now mounted on a pole in Vanges Park, Pangee Street

There are no events in the selected category
Copyright © 2023. Bogan Shire Council.
Desktop Version